Since I keep feeling like I should really be adding more content to this blog-thing, I decided I should try to explain the why and wherefore of one of my projects-of-little-purpose.

The project I've chosen, since I seem to be having fun with it, right now (That will probably change, when I start having to work on the boring bits of it, though.), is cow16.

A later post will go into the painfully gritty^W^Wfun of programming it!

I'll start at the beginning, because that seems like a good place to start; it's a fairly crude, horrible mess of a simple toy processor.

Its design is fairly simple (leaving out how horribly complex it would be to actually implement in hardware; but that's irrelevant, to me.); based around a stack-machine.

By default, they're 10 deep. Nothing I'm likely to do whilst experimenting is likely to run into that limit; but it's easy to increase it later.

Thankfully, they're pretty simple, because all code has to be hand-assembled, at the moment. Writing an assembler, or a compiler, is being left as an exercise for a rainy month sometime after I finish hammering the processor itself into something I'm reasonably happy with.

They're a word wide, the lowest 9 bits specify the opcode (Giving 512 opcodes to play with), and the upper 7 specify a processor type.

Yes, a processor type; so that co-processors of different types can be stuck into the system, each interpreting the 512 opcodes differently, and what happens is decided by which processor is selected by the upper 7 bits.

No, I haven't figured that bit out yet. That's likely to be one of the un-fun things to do. It will most likely be a parallel bus that the word gets shoved down; and each processor masks out instructions that aren't for its type.

A Dash of Memory

It also has 65535 16-bit words of main memory in a flat address space, some of which are eaten up by various little things, which include:

However, the rest of the memory is available for user code and data. A massive 65,272 words. Just imagine the possibilities!

Accessing individual bytes is left as an exercise for the victim^W reader. (Hint: Shifts and XOR. "Not efficient, or easy to use; but it was easy to implement." is our motto here!)

A Pinch of I/O

At the moment, it's really only O. There are two I/O ports, both 16 bits wide ("Because it was easy to implement like that."), that just display in the UI.

The intent is for them to somehow (Yup, another thing I haven't thought out all that much.) be connected to other (external) programs that pretend to be devices. UNIX sockets spring to mind here, but I'm not sure I particularly like that idea; it just seems somewhat overcomplicated. ("Oh, and the rest of this thing isn't?!" Shush.)

The currently implemented UI looks kinda neat when I run the simple I/O test BIOS, though. Blinkenlights! (Even though all it does is increment a counter and write it out to PORT A.) 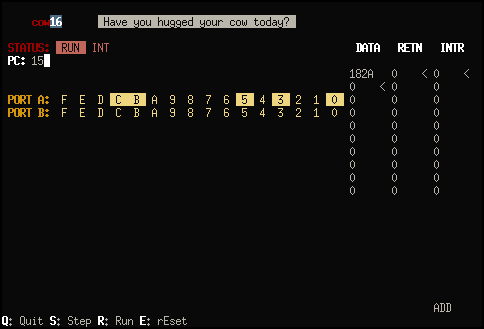 Figuring out how to make I/O actually work as I/O is pretty high on my list of things to do. (Mostly because all the fun stuff comes from interacting with the world.)

And a list of bugs longer than my arm

Okay, it's not quite that bad. There are only a few bugs that I've found, and I already have a plan to deal with most of them.

I'm rather surprised there aren't more; but I'm sure I'll find some when I try to do anything interesting with it.

Large chunks of the spec have now managed to become stable enough that they can be almost relied upon not to be changed; the list of opcodes, for example.

And, probably, the memory map; but don't quote me on that bit. It's my toy project, I make no promises about stability, and reserve the right to make massive changes (Like how I just rewrote it from the ground up to get cow16) with little to no notice.